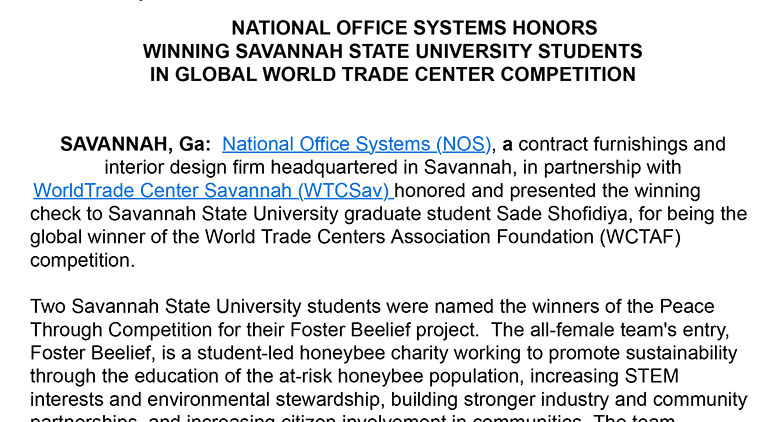 The Foster Beelief team, otherwise known as “The Hive,” is led by Shofidiya, from Chicago, Ill who serves as the team’s Chief Executive Officer, and Karen Rerez, from Dallas, Texas, who serves as Chief Logistics Officer. Both women are former WTCSav interns and current graduate students at SSU.

Foster Beelief is a double-pronged initiative. On one hand, Foster Beelief’s educational outreach program promotes an appreciation for wildlife, sustainable practices and pro-citizen behavior amongst low-income communities. On the other side, the consumable plants from Foster Beelief’s pollinator gardens will function as a food source for both the honeybee and these communities impacted by food deserts, thus fulfilling the social need for healthier food options in marginalized communities while helping to sustain the honeybees.

The Foster Beelief Team was sponsored by National Office Systems in the competition. As part of their “Foster-A-Hive” Program, a hive is now installed in National Office System’s courtyard in further support of this winning project. Hives on your property demonstrate your commitment to sustainability and making a positive impact on the environment while supporting plant production, pollinator health, the public health of future generations and student research

The Peace Through Trade Competition is a student contest for the next generation of entrepreneurial leaders hosted by WTCAF. Teams were asked to present an original project, product or other innovative ideas that “exemplifies and promotes social innovation and sustainability through collaboration, fair trade and ethical business practices.” The project also needed to address one of the 17 United Nations Sustainable Development Goals. Foster Beelief addressed seven of these goals.

Savannah Board Member, presenting the winning check to Sade Shofidiya, Foster Beelief CEO and Savannah State University Graduate Student standing by one of the beehives.